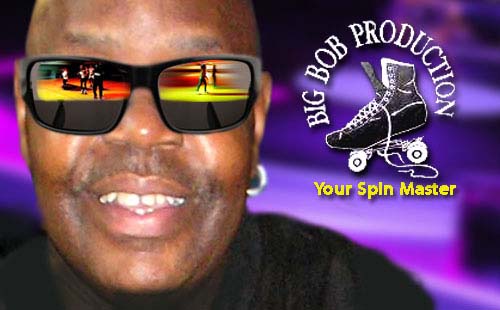 A Master at Mixing and Spinning the best sounds

“If Big Bob is playin’ I’ll be there!!” These words are heard so often when it comes to DJ Big Bob. Himself a skater, Big Bob knows what moves the skate crowd: he not only hears the music, he also feels it. Hip Hop, Reggae, Club, House, Jazz, Disco and R&B flow as if they are one sound on the skate floor: “I’ll play Ludacris, Stevie Wonder, ‘Bounce, Rock, Skate, Roll’ by Vaughan Mason,” says Big Bob. “[Skating] is a spiritual expression of who you are.”

Big Bob has played all major skate venues, including NYC famous former rinks like the Empire, the Skate Key and the Roxy. Resident DJ at the Skate Circle, he also plays regularly for the Crazy Legs Skate Club on  Wednesday Nights and Hot Skates on Thursday Nights.

On the scene for decades, Big Bob has done a lot for the skating community. He is behind the Atlanta Skate-A-Thon, the Silver and Gold’s Baltimore Scenario , the Virginia Skate Connections Phase Parties, the Millennium Skate World’s True Skaters Weekend , Lateef and Crissy’s New York Experience, Morris’ Philly/New York Throwdown and NSC Freestyle Rollers Charlotte Party .

“— Big Bob is the maestro of skating music. Whenever and wherever he plays, skaters follow.”

“ — Big Bob has the ‘Midas Touch’ when it comes to controlling the wheels of steel.“

Some of Our Resident DJs